It is fun to stack everyone, though.
It's a huge pile of original characters.
Like B-Man's.

How has everyones' day been?
Top

Also I just have to say how awesome this community is. You guys are the greatest!

Cool.
It's curious how i'm not posting as often as i usually do.
I'll get back to work as soon as i get some inspiration or something.
Top

You've been making some really cool things happen behind the scenes though Hans
Don't worry, we still know you exist :D
Top

Turtley if you're trying for the "what in the hell...?" response you have to try harder
Top

Yeah you're going to have to provoke me further.

I said heck even, so you did not reach your goal.
Top

That's right, Hans. You're still making (and showing) a lot of really cool stuff behind the scenes. There's no need to hurry for anything. Remember: Quality > Quantity, and you surely makes a lot of high-quality things! (Who has the "Best Mappack Ever" mappack?)

HugoBDesigner wrote:Also, what's happening to everyone's avatars? (Or is it just me?)

HugoBDesigner wrote:Also, what's happening to everyone's avatars? (Or is it just me?)

I won't take off my avatar to this fad. Sorry, fad-lovers...
Top

You asked for it B-Man

You know that Saso will probably ban you, right?
Top

Chat room avatar fad? I cannot figure out what you guys are talking about; it looks normal to me

@Saulo, now you're just being obnoxious
Hans started the fad anyways
I mean really
smile.jpg isn't even funny what is this 2012
Top

I don't see what's wrong with Saulo's avatar. I mean, it's just a hero, a powerful boy of some kind, right? 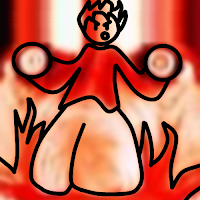 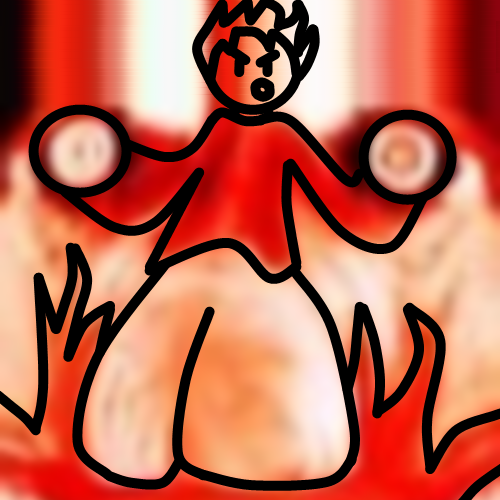 Woah hugo I did the same thing (I made a king though).
We must have the same thought process.
Saulo changed his avatar though so I deleted it.
BUT REALLY WE THOUGHT OF THE SAME THING WHAT'S HAPPENING!!!
Top

It's the end of the world! OMG, run!!!
Actually, we kind of look a lot like each other in therms of thinking, so this kind of thing might happen more :P

EDIT: Why don't you post yours? I'm dying to see it xD
Top

I'll clarify what happened:
1. We were talking and joking around telling Saulo to do something in a steam group chat
2. He got really obnoxious, spammed this really disturbing image, and then had it as his forum avatar for a little while.
3. It was creepy as f#*%. Seriously.

Anyways the only reason why I felt the need to say all of this is because Saulo asked "Why would I be banned for being myself?"
That's frankly a stupid question, so here's my two cents.

A situation doesn't excuse other wrong. Even if you (speaking generally here) feel pressured it doesn't give you the right to be a jerk back.
The same applies to "being yourself." By all means be yourself, but if "being yourself" implies being an asshole than you're probably going to be called out on it and there's nothing wrong with that.

B-Man99 wrote:Chat room avatar fad? I cannot figure out what you guys are talking about; it looks normal to me

Hey guys, guess what? its 4/20, you know what that means right?
Its Easter
Top

It's been 16 minutes and I already read your post like 4 times and made a joke on the birthday thread about Easter and I just now caught on to the 420 joke
Well played
MM102: better at sending hidden messages than I was in the last post

...what did they put in those easter eggs this year?
Top

HugoBDesigner wrote:EDIT: Why don't you post yours? I'm dying to see it xD

I deleted it. I could recreate it
*searches for original image*
ok i found it

Naw i won't do it today it's nighttime. Don't judge me, you never know what you'll dream.

Now if you excuse me go I'll watch mlp until i go to sleep.
#ima_get_10_imaginary_bucks #scared_alesan_lol #sweetdreams
Top

alesan99 wrote: If I have a nightmare you owe me 10 imaginary bucks

Yay it's Easter! Hope everyone has a nice easter, I'm busy so I won't be on much. I can go to bed satisfied that I said this on the day though.
Screw time zones.

Happy Easter! May your wishes come true ~ !
So how do you guys celebrate Easter in your country?
Here we eat roasted lamb and we bump painted and decorated eggs. (not sure if bump is the correct term). Widespread tradition is to fight with eggs by pair and one's egg become last surviving. Whoever has the last egg standing is the "winner". We also eat cozonac, which is basically sweet bread with cocoa and nuts.
Top

I recieved a lot of chocolate, but i don't like chocolate so much, so i will make ice cream with it.
Top

To be honest, I barely celebrate Easter. Spent more time at the Stabyourself steam groups' chat. It's been a good time there.
Top

gemwrecker wrote:To be honest, I barely celebrate Easter. Spent more time at the Stabyourself steam groups' chat. It's been a good time there.

Hell yeah that chat is awesome
I'm literally there 24/7
If I don't say it's awesome that would make me look even more crazy than I actually am
...
When I was younger they had these things called "easter egg hunts" and the adults would like get a ton of kids in one place and have them try to find easter eggs
I was always complaining that it was too easy...
Now we just have family over and hang out it's pretty cool
I'd rather be songwriting though, which is weird because I just got done with a massive project but now I'm just like doin' random stuff for the heck of it and today I guess I'm just in the mood I dunno

Technically those aren't equivalent.
The fact that it's 4/20/2014 means it is Easter, however.

Nice try though mine is still better -_-
CHRIS

happy easter everyone
have animal cruelty

Happy Easter, everyone! May you have lots of chocolate (or not)!
Top

TurretBot wrote:Okay. I got a PM from "MegaAdult" but he claims to be Wilo.
I'll just be a good Turret and do what he says.

MegaAdult wrote:This is Wilo. I'm trapped in purgatory.
Tell everyone I love them.
Except B-Man. Not him. I'm watching him.
Anyways tell everyone I'm coming back on World 5-3.
Cryptisism. Also, I'm a guest all the time, unless. Yeah.
I've got a bunch of free time so I might make dumb edits or something.
Like I said, yeah. Yeah.
Copy/paste this to Chat Room v3.
Thank you.

Happy Easter everyone! Have fun while searching Eggs! (I have stolen them :P )
Top

Chat room v3... come on, can people stop getting hyper when a chat room gets to 100 pages?
Anyways got Super Hexagon a few days back. I missed out on it for too long.
Top

Mariobros2 wrote:Chat room v3... come on, can people stop getting hyper when a chat room gets to 100 pages?

(Stuff was hyper because everyone happened to be on at the same time because it was spring break.)

Because this will happen:

I want this game now just because of

I think I'm going to stay logged out for a week.
Top

See you in a week then. Or a few days when you cave. Whichever happens first.
Top

Sigh... I can't sleep.
I know this sounds kind of random, but sleep/dreams can be an interesting topic
I don't know how to start the conversation really
Time zones are weird anyway
I don't know

In other news, the "no avatar" fad died before it learned how to live
I guess the tower story is considered a fad now and a ton of the people here just couldn't handle so much awesome at once :P

Have a nice week renhoek.
Top

So guys, as (I hope) some of you know, I've been making some "superplays" of Mari0 using a modified bullettime that removes the white gradient. Also as some of you (might) know, I've made a TAS (Tool-Assisted Speedrun) of New Super Mario Bros. for the DS. So for me, the first thing I thought when I saw Mari0 for the first time was "This game would look freaking awesome if it was TASed somehow". What would you guys think? Wouldn't something like this be awesome? I'd really to make speedruns of the SMB mappack and community mappacks. Opinions?
Top

I'd like to see something on that line done, since TAS's are pretty neat to watch. If you can pull it off I say go for it.
Top

alesan99 and I paraphrase: wrote:Saulos avatar was scary *picture of it*